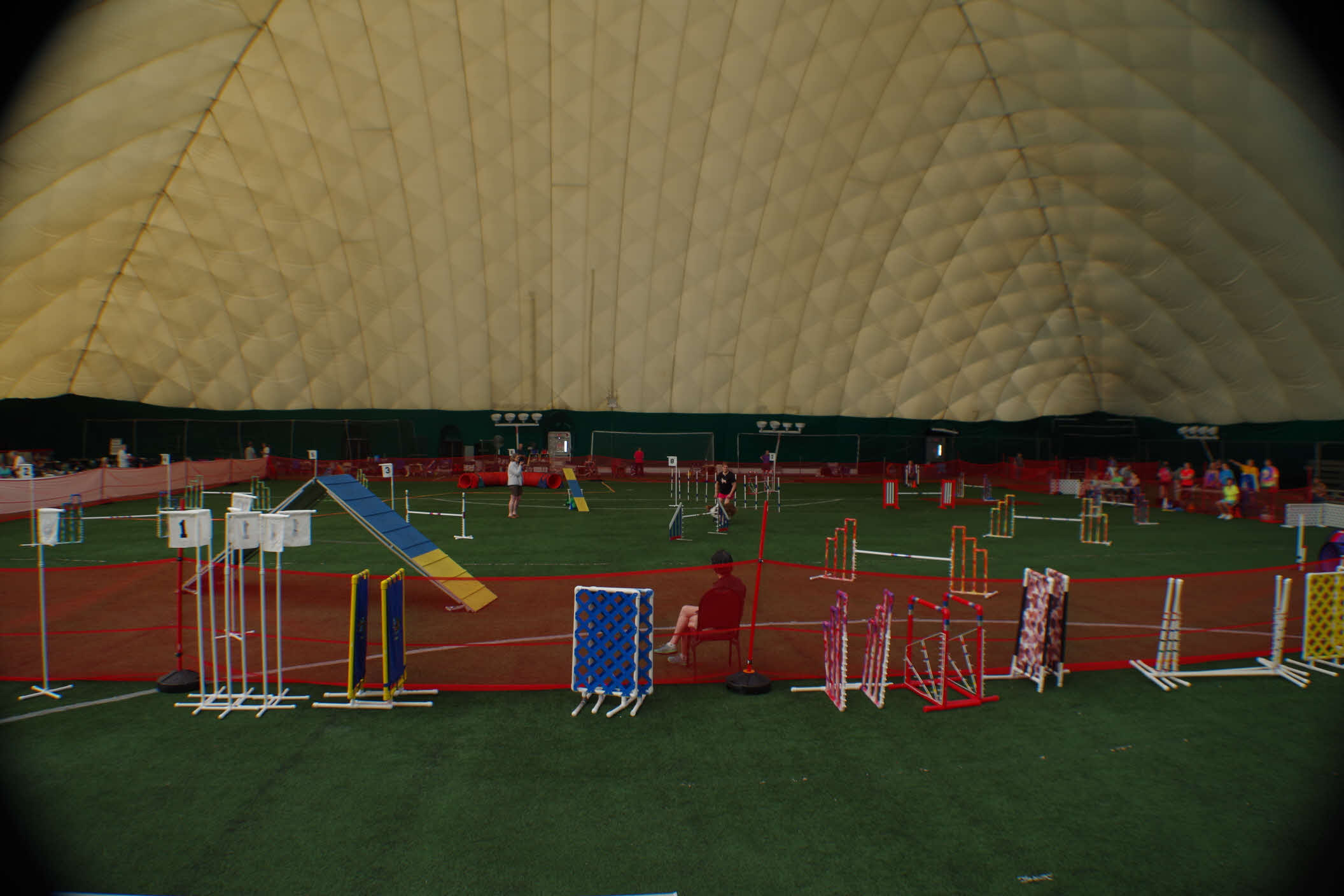 More details on dog agility trials at Avanti’s Dome
There were no cramped quarters to be found at the POTC’s (Peoria Obedience Training Club’s) Agility trial held at Avanti’s Dome in Pekin, Illinois on June 9-11, 2017. The  75,000-square-foot inflatable dome, a 7,100-square-foot reception building, and four outdoor softball/baseball diamonds reside on a 33-acre plot.

For an agility trial, the vast spaciousness of the dome, rings, aisles, crating, viewing areas, vending, restrooms, and parking was refreshing. The dogs seemed to enjoy it too, especially any that normally might be reactive or become stressed from over-crowded surroundings. Judges Dawn Glaser-Falk and Laura English created some very fun courses using all that space too!

Volunteers Make all the Difference 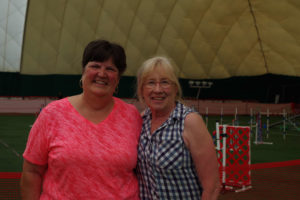 Trial chair Roxanne Minor and assistant chair Nancy Affolter did an excellent job in coordinating the trial and its workers. “It was our first time as chairs, and it was easier than I thought it would be,” said Roxanne. “We have great volunteers in our club, and many of them are already familiar with their jobs. This makes things run much more smoothly.”

It was amazing to see the club in action. From the time I arrived early Thursday evening as the equipment was unloaded from rental vans and rings were set-up, to when I went to volunteer and saw the scribe, assistant scribe, timer, and gate positions all filled for the entire day, I knew this was no ordinary club! Constant requests for more volunteers throughout the trial is common in most clubs. Not so with POTC.

“Part of this is POTC’s new Coordinator position whose responsibility it is to obtain compatible scribe, assistant scribe, timer and gate volunteers before the trial begins,” explained Roxanne. “The club also offers a volunteer training workshop to teach those interested in some of the more advanced positions how to do the jobs,” Roxanne continued. “Then we use fun runs for the trainees to practice their new skills before the actual trial.”

Other incentives for volunteers at trials involve POTC’s operation itself. Members are required to put in 16 hours of volunteer time per year and pay $85 annual dues. In exchange, members receive free lessons in the club-owned building. Clubs out there, take note!

Climate in the Dome

Avanti’s Dome is a pressurized, climate controlled facility. We entered the 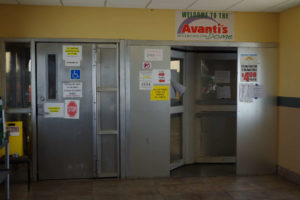 actual dome part through either a revolving door, or through steel doors the opened into a small pressure chamber, where one door has to close before the other one opens. Dome staff opened the doors to this chamber as we hauled in crates and dogs during the busiest times of day.

The weekend was a sunny hot one, with temps in the high 80’s to low 90’s. Humidity started out low but inched up to 48% by Sunday. Inside, the air conditioners were blowing full force, both day and night. There were also numerous industrial fans blowing away. It takes a lot to keep such a high structure cool in these conditions! But they did a very good job. It did get a little sticky in the afternoon, especially when under the lighter colored part of the dome roof, but I’ve been in just as sticky soccer facilities that are not domes and claim to be air conditioned. Would I come back if I knew it would be this hot again? You bet!

The Floor and More

The floor is soccer turf, and I found the footing very good for both dog and handler. The rings were divided by 3 foot high fine orange rolled mesh fencing. The back walls had white plastic over them to provide blocking on one side to help the dogs focus in the ring. Bleachers were set up in front and in the middle of both rings for viewing. 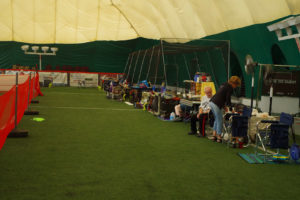 Crating was along the side walls and in back, a bit of a walk in some cases, but not bad. A tip is to crate along the side if you get there early enough, since the air conditioners are there, the ceiling is darker colored, and it is much cooler.

Food vending was provided by Avanti’s Ristorante, who had their own in-house food counter in the front of the building before entering the dome itself. The food was limited but excellent. Catering/Concession Manager Alicia Strope custom ordered a gluten free salad for me and had it ready the next day.

A variety of vending booths had good visibility along the front wall of the Dome. They were able to enter the Dome through the back door, and could drive their vehicles inside to set up and tear down. Because of the pressure, this was only allowed after trial hours, so vendors leaving early had to use the revolving or air chamber doors.

Overnight options at the dome involved dry camping. It wasn’t lonely though, since Avanti’s Dome also owns two busy baseball fields whose games ran through 10:30 pm at night. The fields were quite a distance from where most RV’s parked though, and were not a noise issue.

Finally, I would be remiss if I did not mention the trial secretary’s nightmare that occurred at this trial: the score keeping software upgrade was corrupt and not working the first day! Sure helped to have ladies working the score table who remembered the days when software wasn’t available, and sprang into action. As a result, it was barely noticeable except when seeing hand-written scores in the score books, and writing our own information on the back of the ribbons since labels could not be printed either. Thankfully, all was working again by Saturday! Thank you Le Hayes and your table staff help for pulling it off. You are amazing.