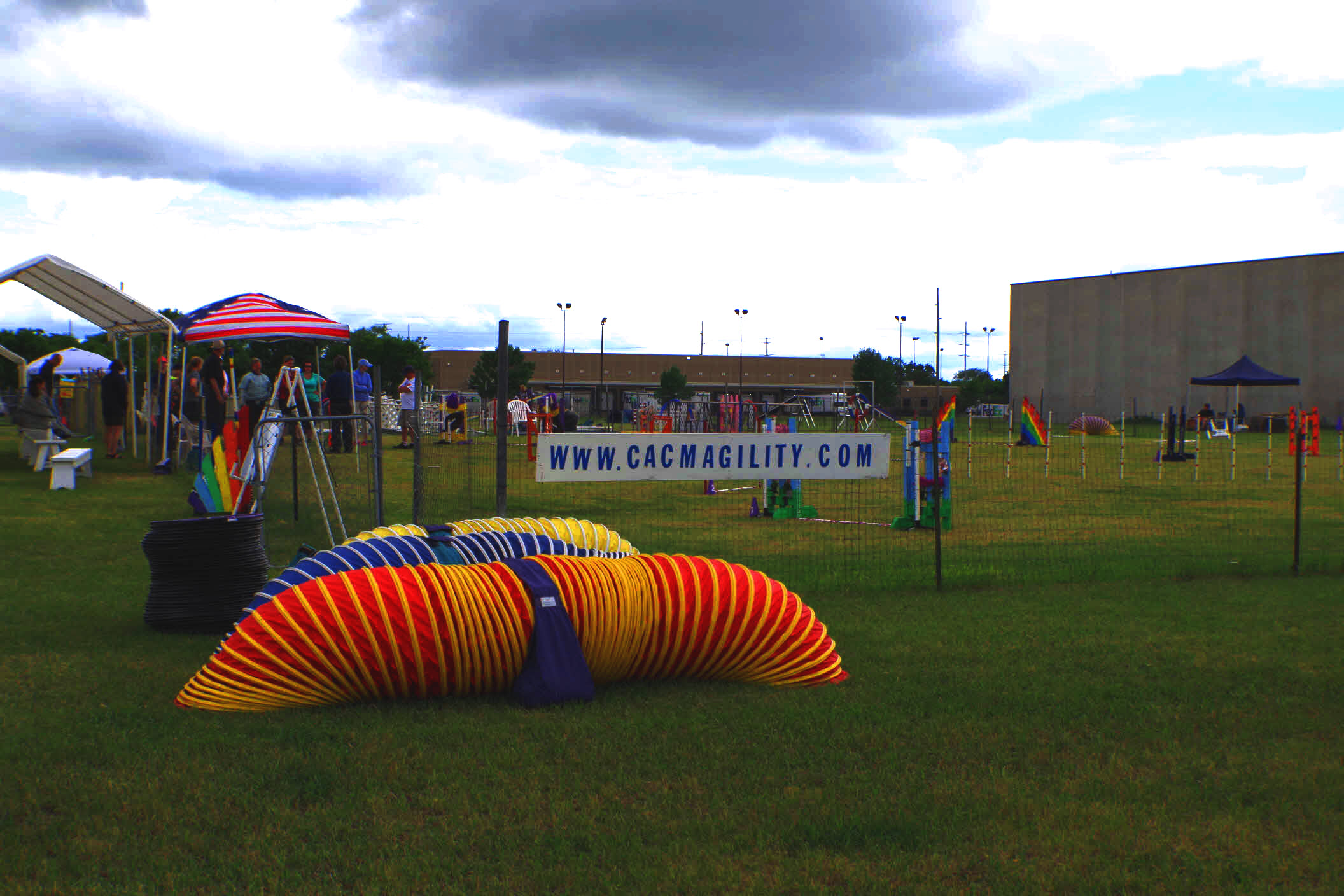 The Canine Agility of Central Minnesota club (CACM) surprised me at their outdoor agility trial held at 6305 Glenn Carlson Dr., St. Cloud, MN.on June 17-18, 2017. Expecting to find temporary fencing, typical equipment, and a bumpy running surface, this trial provided quite the opposite. 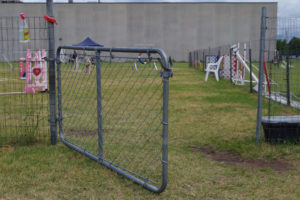 Fencing was chain link with permanent gates. There were actually three fenced areas, two were used for the agility trial. The third area held one of the two practice jumps, where the handler had the choice of shutting the gate if desired. After agility trial hours, some handlers exercised their dogs in this ring too.

The surface was grass over sand, and despite the moles evidenced by walking on other parts of the field, there were no bumps during the trial. One of the rings had a slight incline to it, but other than that it was flat and quite smooth.

Can you say “creative” jumps?

While the contact obstacles were typical, the jumps were definitely the most a-typical I’ve ever seen. Have you ever seen a jump:
* painted college colors with a football shape in the middle and real pom poms?
* Spring themed with flowers being watered by a pink watering cans affixed above them?
* Thanksgiving themed with horns of plenty, bananas, grapes, and other fruit attached on one side and a Turkey on the other?

“The members are quite protective of the jumps,” according to Betty Johnson, CACM’s trial secretary and the club’s Vice President. “We only bring them out for trials, and the rest of the time they are carefully stored in one of the tractor trailers.”

Win-win on leasing the land

The club’s arrangements for land use, trailers, and lessons are also unique. “We lease the land here between the two industrial buildings,” Betty explained. “The same company owns both buildings, so that helps. They don’t want to sell the land so are happy to lease it to us, partly paid for by maintenance of the land. That’s a great deal for us both.”

The club’s equipment is stored in two club-owned tractor trailers set down at trial site. They offer agility lessons there 4 nights a week from May through September. Rally and scent work are also offered. During the colder months, lessons are provided at a 50′ x 100′ heated building with packed dirt flooring on the Johnson’s property, about 17 miles away. “We also offer rental of that building to club members at $10 per dog per hour when it isn’t being used for lessons,” said Karl Johnson, Betty’s husband. “It works well for the club.”

RV parking was flat, along a tar entry road that ran parallel with the agility rings. According to Judy Johnson from Wenatchee, Washington and a new agility friend, “It is the best RV parking I’ve seen at a trial.” Judy also found the outdoor trial space very enjoyable and said she’ll be back next year if at all possible. “I really love this place!” she remarked.

Drainage is the best

As with all outdoor trials, the weather can put a damper on things. While high heat or storms can interfere at CACM trials, the rain itself is not a problem. “That’s because of the sandy soil,” according to Karl Johnson. “It drains so well that there’s no mud or flooding. At one trial we had over 2 inches of rain in one day, and water didn’t puddle anywhere. The judge was shocked!”

There are 5 trials a year at this location: One each for AKC, NADAC and USDAA, and two for CPE. A small outdoor location in northern Minnesota holding that many trials and 4 different venues is also quite unique. Don’t you always love surprises?