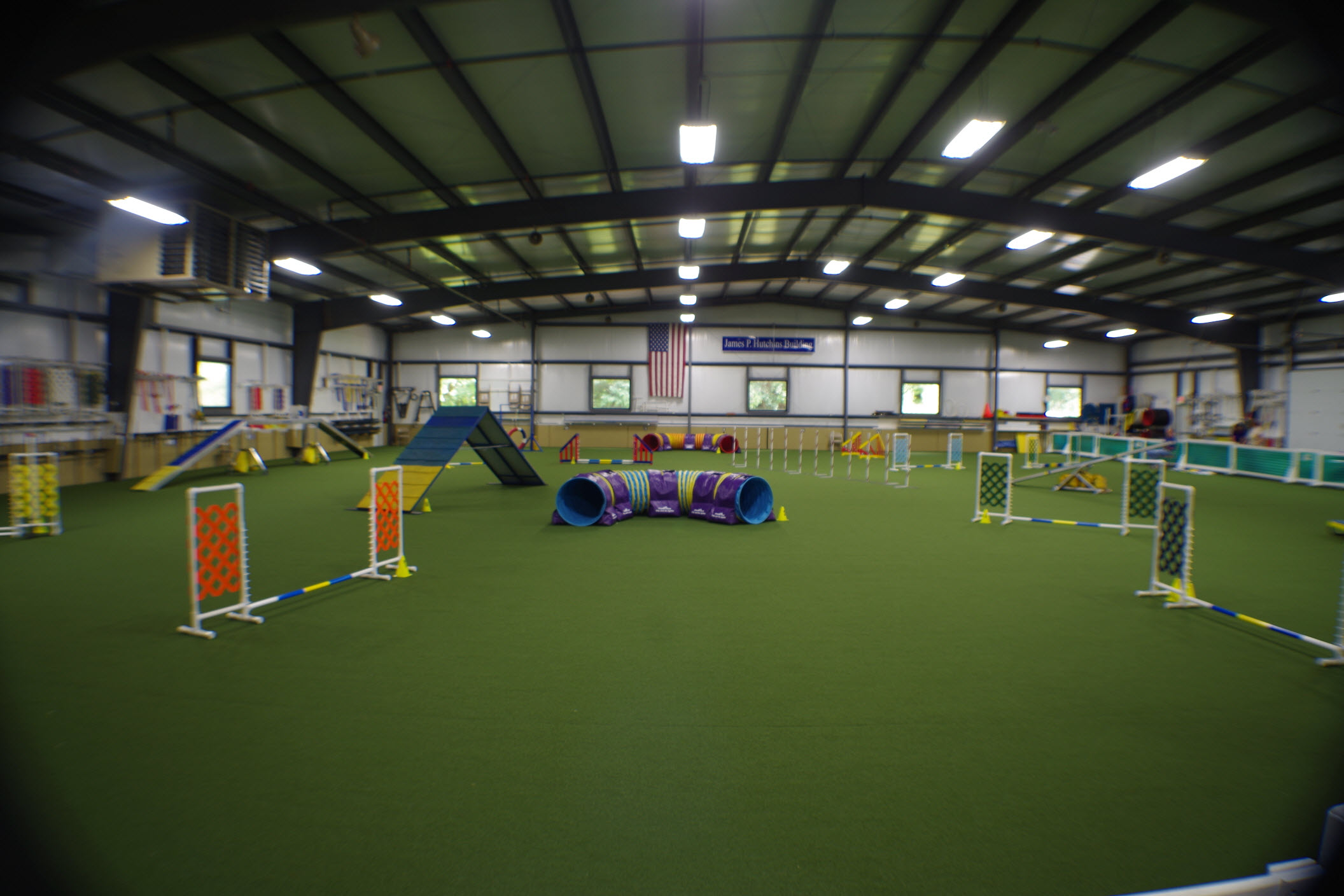 “The facility didn’t get this way without a lot of heart and soul put into it by some fun and hard-working people,” according to trial co-chair Jane Dewey – my primary informant for this ‘scroll.’ “There’s a core group of 15 to 20 people who all worked together to make it happen. We’re a cohesive bunch, and we work like a well-oiled machine.”

Jane mentioned Erica Behnke, the club’s president and trial secretary. “She’s a fantastic president, an awesome leader, and has a lovely sense of humor.” She went on to include Catherine Berberich, QCDTC’s treasure, “A stickler for details, and to the club’s financial benefit!” Susan Schmidt, the trial chair, Ivan Immel on equipment, and White Bourland on maintenance are also key players. “The list goes on and on and I’ll mention them all if you give me room.”

Queen City Dog Training Club was founded in 1948 and is the oldest dog club in Cincinnatti. They purchased the existing building in 2011 and named the ring portion the “Jim Hutchins Building” in recognition of all the work he did to help purchase the property and make the location what it is today. “We were proud to name it in honor of Jim,” Jane said. “It is befitting of what he put into it.”

Everyone was talking about the new floor, which had its debut at the previous weekend’s trial. Formerly a Dandy rubber mat floor over 3/4″ foam, the QCDTC invested no less than $50,000 to install a Grass Tex PL307 no-fill turf floor right over the original. While it took a little getting used to, my dogs and I found it a joy to run on. There were some ‘regular’ dogs who provided a bit of humor as they stepped onto it for the first time, expecting the mat floor they were used to. Sometimes we know what they are thinking, sometimes we don’t. But this was unmistakable: “What the heck is this?!”

Crating, lunch tables, and vendors were in a large room separate room from the agility ring. Never have I experienced such wide aisles at an agility trial: Well marked with plenty of space to crate along the sides. This feature alone made the trial so much more enjoyable for both dog and handler. There were three rows of lunch tables sectioned off from the crating and practice jump, complete with fresh flowers and clean tablecloths. Vendors were in the back but had spacious areas, quality products, and great visibility. Had my RV not broken down earlier – which subsequently broke MY bank – I would have purchased some of their awesome products! Next time!

The temperatures outside were steamy, but inside QCDTC it was nice and cool as the newer-looking air conditioners worked overtime. Overhead lighting had recently been replaced too, according to Catherine Berberich, QCDTC’s treasure. “We were able to get a nice rebate on the lights, and experienced a significant drop in utility rates since they went in,” she explained. “We’re always looking for ways to save the club money.”

Ever been to a trial where the club members get all the privileges? The best crating, best parking and camping spots, best viewing seats? Not at Queen City. This club insists that their club members park across the street and keep the best spots for non-club members. How generous is that?

Lunch is always appreciated at a trial, but lunch at this trial is exceptional. Not only is there a main dish – sandwiches or wraps with homemade salads or quality meat – but there’s a fantastic salad bar complete with hand chopped toppings. Add coffee, soda, water, and dessert, plus sweet rolls in the morning, and you won’t go home hungry. Kudo’s to the chef!

Today the QCDTC boasts around 480 members under 5 tiers of membership. Members are on probation for a year and get access to use the building for practice after that. There’s a $20 per year cleaning fee added to each membership too. “It works out so much better to have an outside vendor do the cleaning and distribute the cost,” according to Jane. “Just having that chore done, and done right, is huge.”

The club offers training lessons, and brings in some great speakers for seminars and workshops. In addition to agility, QCDTC promotes tracking, conformation, obedience and rally.

Some of the club’s challenges are akin to many non-profits today: it’s usually the same people taking on the hard work. “We’d like everyone to feel welcome without being pushy about asking them to work,” Jane said. “But it would sure be nice to have more key workers. We’re still working on that one.”

QCDTC puts on three 3-day agility trials a year and three obedience and rally trials. In addition, the club hosts trials for other clubs, as opposed to simply renting out the facility. This means the same staff serve in key roles, from secretary, trial chair, and chef, to ring crew. “One of the things we’re most proud of is the quality of our trials,” Jane said. “A woman moved here from the Lexington area just to be part of the club. We’re thrilled that we’ve made that big of an impact.”

“It’s my favorite place to trial,” said Marilyn Roth-Basinger, a Corgi owner and frequent participant at the Queen City trials. “They’re well organized and have really great people.” I actually met Marilyn’s husband a few days before the trial when they were camped at Winton Woods, the same campground where I’d been staying the previous week. Though reserved about her dogs then, her agility skills came out in her Corgis’ QQ’s both days! Congratulations Marilyn! I can see why you love it here so much!

Overall, QCDTC is royalty territory. They’ve capitalized on some of the most important features that agility clubs want, and are both fortunate and proud to have hard-working folks in their membership to make it all happen. QCDTC members are not in this to make money, they are in this to provide a great place to train and trial – for others and for themselves. And for all AKC clubs out there, start salivating when you see these monthly meeting stats taken from their latest newsletter:  “Sixty two Regular Members, six Associate Members and eleven Guests were in attendance.” So hail to the queen! It’s easy to see why people move nearby to be part of your kingdom!