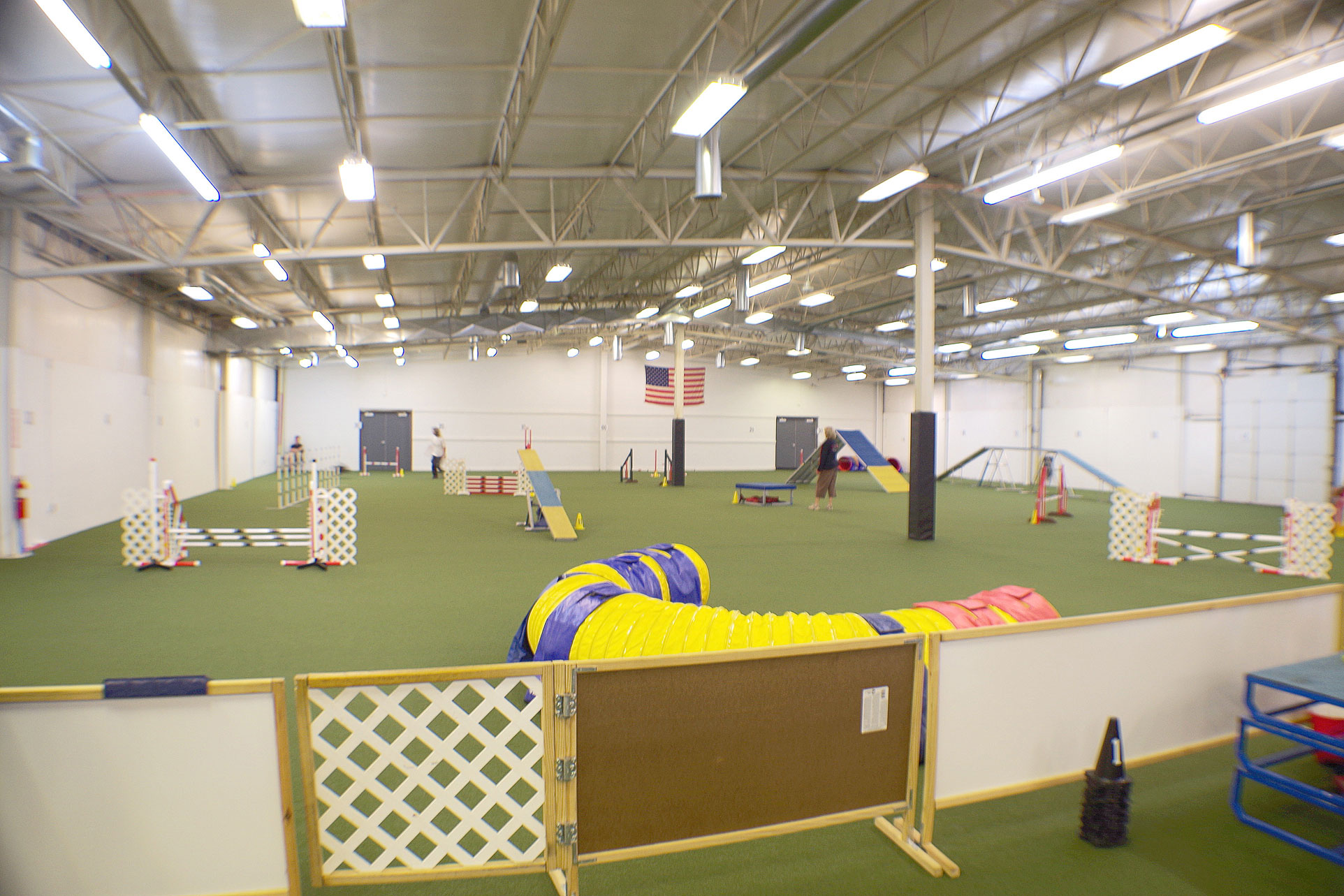 Much like TNT in Midland, Michigan, IncrediPAWS at 10465 Columbus Parkway in Pataskala, Ohio is another magical place when it comes to agility. There’s great flooring, superb climate control, top dogs, and awesome attitudes. My dogs and I went bar hopping there July 7-9, 2017 at a trial put on by the Columbus Collie Club, with judge Lynn Morgan from Scranton, Kansas. A rep from AKC was present for most of the trial.

Jenn Crank, inspiration for the magic

Owner Jenn Crank is the main inspiration for the magic around the place. As a top agility competitor in both the U.S. and internationally, she passes her passion and skill on to her trainers, students, and canines. “I got my first title in 1993 with a Shetland Sheepdog,” Jenn said. (That would make Jenn 6 years old at the time!) “Now agility is my life, and I can’t imagine doing anything else.”

After running Shelties as a child, Jenn got her first Border Collie at 18 and has had only two since then. “I kept asking my mom for a Border and my mom said no, no, no. I really really wanted one. So when I turned 18, I finally got one,” Jenn explained. “They’re great dogs, but as you can see, my heart is focused on Shelties.” 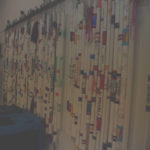 Jenn’s agility record is impressive. She represented the U.S. at the Agility World Championships, AKC World Team, World Agility Open, and IFCS World Championship team. She won numerous medals at many of these events. She hasn’t missed nationals since she can remember. There were more MACH bars hanging on a wall at IncrediPAWS than most clubs award over several years time. And she leaves in two weeks for the European Open in Italy taking her dogs Swift and Lucky. “I run up to 10 dogs at every home trial, but they’re not all my own,” Jenn explained. “I run for handlers who may be sick, as favors for students, and am even paid to run some dogs.”

“I actually prefer USDA over AKC,” Jenn said. “Particularly because of the QQ mentality in AKC. It rewards accuracy over risk and speed, so as handlers we’re more careful if we’re up for a QQ. That shouldn’t be the case in agility.” She still likes AKC a lot and admits that its good that the rules are different for different venues.

Jenn has also worked hard to build a great facility. “We held classes at a former location but it wasn’t big enough for trials,” Jenn said. “So three years ago we leased this facility.” They now hold trials there 25 to 30 weekends a year.

The agility ring has a floor made of the type of material that is used on golf course greens. It was great to run on for both my dogs and I, although scratchy on my knees when I bent down to change bar heights as a ring crew volunteer. The ring has two square poles in ring itself, measuring about a foot wide on each side including the padding. Lighting is excellent. Overall, I loved running here.

Wind beneath her wings?

The trial was chaired by Jenn’s mom, Susan Crank. Susan is the business manager at IncrediPAWS as well as an instructor. Her agility background is quite impressive too: 7 ADCH’s, 50+ MACH’s, member of the AKC Europeon Open and AKC World Championship Teams … the list goes on. While she did take Saturday off to go to a Jimmy Buffet concert, after which many of us wore Hawaiian shirts on Sunday, her presence at the trial was unmistakable. Not only did she earn a MACH on a student’s dog, but her upbeat, smiling attitude and encouragement was evident wherever I looked.

With all that IncrediPAWS has going for it – and that is a LOT – it lacks crating space and a good viewing area. Things are congested so much that they don’t allow chairs in the crating area. While getting to and from the ring is congested enough, crating in the middle of any isle is even rougher. The viewing area is in front of the crating space, and also can be very congested with long isles. Not knowing any of this, I crated in the middle of both the viewing area and the crating area. Worst of both worlds. Constantly saying “excuse me” to get to my chair, and constantly walking my dogs through sometimes unfriendly territory to potty or run. A middle aisle in both would have helped, but also would have taken up space.

Jenn has a beautiful son named Ethan who turns 3 in September. As a result, “we’re super kid friendly here!” she remarked. “If kids bother you or your dogs, this is not the place for you.” It was so fun watching Ethan help put down cones and even set bars! He has some clowns to play with too – agility men who think they are kids – playing hide and seek, tag, and other fun games while setting courses. It was entertainment for the rest of us, that’s for sure!

Classes are held Monday through Friday and have wait lists from 4 to 6 months out. The facility is generally busy 7:30 am until 9:30 pm. Jenn teaches the Awesome Paws Handling System developed by her coach and mentor, Linda Mecklenburg. “Some students travel several hours to get to classes,” Jenn said. “That actually works well because those handlers attend 2 hour classes every other week. It gives them more time for homework, especially if they attend a 3-day trial in between.”

All students have a spot in their class unless told otherwise. There are 6 people in every class – maybe 7 if they’re all same jump height – and she has 6 instructors now besides herself. “They all have to teach to my standards,” Jenn says. “You have to get that to be an instructor here.”

Maybe I put Jenn on the spot when asking about her accomplished students since she has so many! Off hand she mentioned Kim Barton with Logan, who won the preferred 4″ dog at AKC nationals with her all American. Then there’s Roger and Abby with Dreamer on World Team. That team also went to nationals twice on the AKC team. Overall Jenn had 11 students at finals this year.

I had the opportunity to chat with Betsey Lynch at the trial, another accomplished student of Jenn’s. Betsey’s Papillon “Wren” won USDA nationals in 2016 and 2017, and she credits Jenn’s instruction as a big part of that. Back in 1986, Betsey competed in conformation with a Rottweiler and a Bernese Mountain Dog. She was introduced to agility about 20 years ago and moved to Cavaliers that she bred herself (those boyfriend reasons you know), then got her first Papillon in 2006.

In June of this year, Wren also won the weave pole challenge at the Western Regional Incredible Dog Challenge in CA. That included 30 weaves, a tunnel, and 30 weaves back. Wren’s primary competitors for that challenge were Border Collies! “She’s a great dog, gives lots of incentive to work hard and I try to give it all back to her,” Betsy says about Wren. In one word: WOW!

Some of Jenn’s challenges at IncrediPAWS are also strengths: Growing faster than the space they have, and offering such high quality classes that no one wants to leave. But that comes with not-so-strong challenges too. “It’s harder to get young blood in for lower level classes when those classes are not available,” Jenn says. “We only run beginning level classes once a year. There’s such high demand for the higher level classes. But that isn’t bringing in new or younger students. We need to do something about that.”

She also mentioned the challenge of getting classes in cohesive groups: evaluating where students are at and trying to group them with similar goals. “Some students are intent on competing internationally; some have lots of drive and do their homework every week; and others want a friends-type class. Great matches in class build great relationships, so I work hard to pair things right. It’s fun and rewarding, but also challenging!”

Win the lottery! Build a bigger building! GROW! No kidding, Jenn mentioned all of these. She also added that she’d like to move more into a management role at IncrediPAWS,  and have space and instructors to add more entry level classes with progression to the advanced ones. Continuing education, more seminars, and employee training are also high on her list.

She does not plan to renew her current lease for a full 3 years, but rather hopes to find a bigger space for trials, parking, dog potty areas, a second ring, and a house on same property. That sounds like a pretty big ticket, but don’t underestimate this woman. “I’m 30 years old, and will do agility for rest of my life,” she explained. “I’m in this for life, and I’d like to make it happen!”

Jenn says her best moments come when she runs a course like she should run it. Those moments are even better when she Q’s. “Taking the risk is what it’s all about,” she believes.

On a personal note, I felt lots of support for others at this trial, even in open and novice classes: Clapping, cheering, kind comments, and overall encouragement were the norm. To the last run – when most trials are quiet and most fans are long gone – people were there with support. Perhaps that is one of the most important strengths of all at this place, and certainly part of its magic.

One thought on “IncrediPAWS in Pataskala OH – Another magical place”