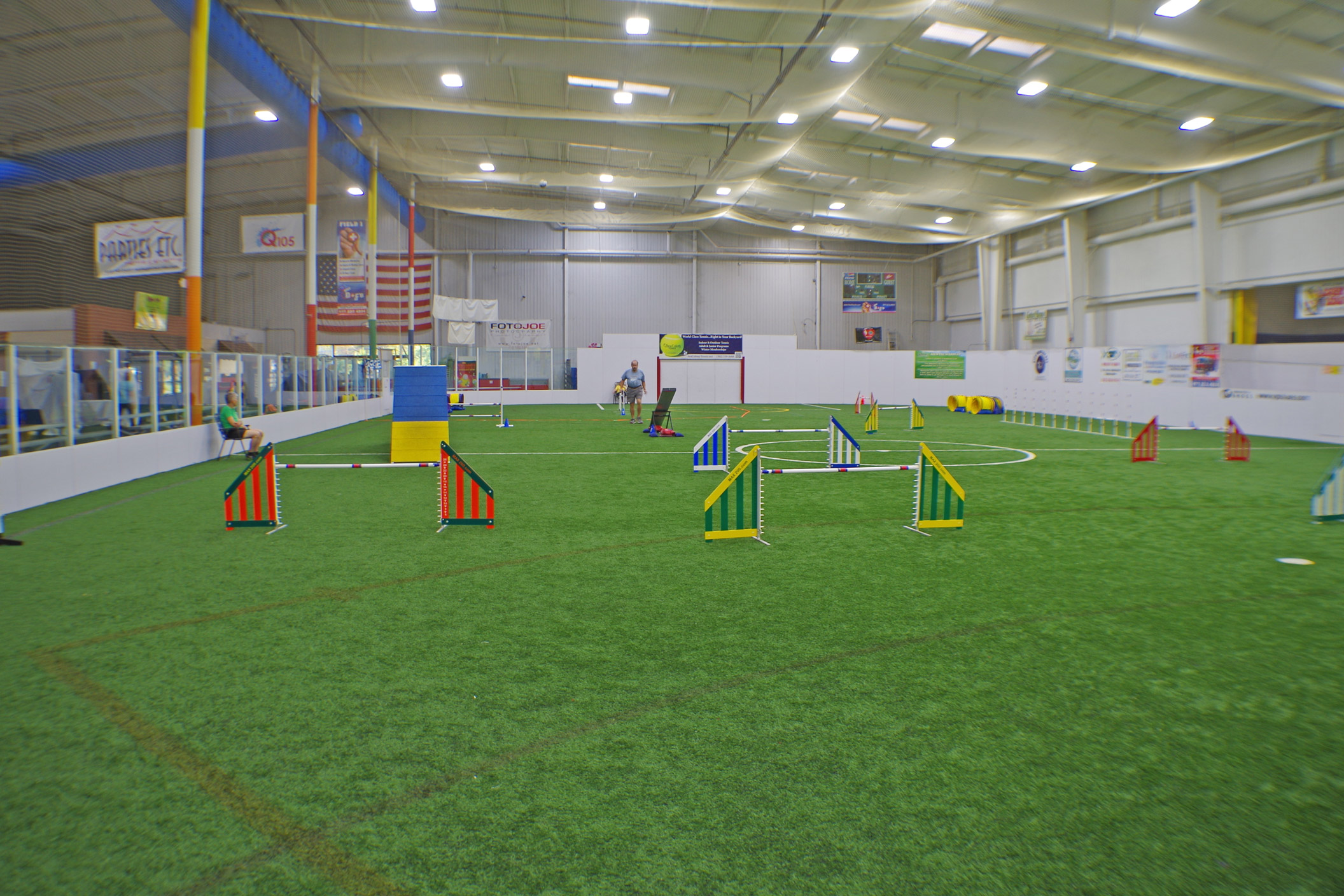 It’s hard to imagine the size of Crown Sports in Eden, Maryland until you walk in the door. Even then, it takes a while to get one’s bearings. The front door leads you down an aisle with the agility rings on the left, and restrooms, concessions, offices, an arcade, and another ring on the right. It’s just so big!

Between each agility ring are aisles that take you to the crating side of the building. At least this is how it was set up for the four-day trial I attended September 23-26, 2017. The first 2 days were sponsored by Salisbury Kennel Club, the third day by Potomac Valley Agility Club, and the fourth day was the Golden Retriever Club of America for their National Specialty.

Salisbury Kennel Club expertly ran their trials with Diane Spalding as chairperson. “Our club has held trials here since 2007,” Diane said, and I’ve been chair person for them since 2010. She did an exceptional job too, especially for a not-so-typical trial with other trials backed up after them, making use of their equipment, and additional politics that went along with it.

Despite some good connections with the owners of Crown Sports, the club was originally turned down when they asked if they could hold agility trials there. Dogs on their soccer turf? No way!

But never say never! Luck turned in Salsbury Kennel Club’s favor. Crown’s owner planned to install new turf in one of the rings and visited a soccer facility in Florida to inspect one that had just been installed there. To his complete surprise, a dog agility trial was being held on the new turf on the day he visited. Naturally he drilled that facility’s owner on the merits of having the dogs in, and it changed his mind.

The club now holds agility trials there in April, June, September, and over New Years. Two other clubs now hold trials at Crown Sports too.

The club boasts 160 members, and is an all breed club that focuses on purebred dogs. “Our members all pull together to make it work,” Diane said. “Not only that, but there are two other clubs that help at the trials too: Talbot Kennel Club and Bhad Georgetown. Likewise, we help at their trials which give us plenty of trials in this area!”

The first two agility rings are soccer turf with rubber infill. The turf is extremely well maintained, with no flattening whatsoever and very even distribution of pellets. There were viewing areas in each ring for those who brought their own chairs, and also bleachers along the sides of the ring.

The third ring is a no-fill soccer turf. It was still very nice to run on and I didn’t notice any slippage. The ring was smaller though, so there wasn’t room to set up chairs inside the ring. Even the gate steward stood in the narrow aisle between the end of the 2nd ring and the beginning of the third ring, while dogs lined up in the aisle too. There were bleachers along the side of that 3rd ring for viewing. It is likely that this ring was only used for the two Golden Retriever days, and that it is not in use for typical trials there. Still, it worked and made the specialty possible at that location.

No agility location is ever perfect, and Crown Sports does have an issue with climate control. During Salisbury KC’s trial days, it was very cool in the morning, but heated up considerably in the afternoon. Some isolated rooms were cool, but the A/C just could not keep up in the agility rings and crating areas. There were large industrial fans in the crating area, and one fan in each ring, which helped.

“One of the issues is that the arcade machines generate a lot of heat,” Diane supposed. “Those won’t be used for the rest of the week, but they are used when we trial here on the weekends.” 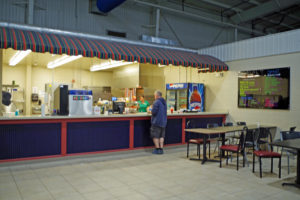 The concessions area was open later in the morning and closed promptly at 3 pm each day. Workers received a ticket for $2 off at the concession stand for each class worked. The early closing was not known by all workers on the 3rd trial day, and some did not get to eat lunch as a result. This was resolved the 4th day with a brilliant plan: workers could submit their order on paper, and pick up their food after they finished working their class.

The food was very good. There were egg selections for breakfast, and burgers, sandwiches and fries for lunch. If I could put in a request, it would be to add some lunch-sized salads to the menu. I’m sure they would be well received by many agility competitors, and perhaps by their other customers too.

There is plenty of room for overnight RV’s and campers, but no hookups. This is common at 3-day trials and perfectly acceptable. But it can be taxing at longer events, such as the national specialty. A water truck came to offer RV tank refills for those that needed them at a nominal cost. Full sewage tanks were not as simply resolved though, and required driving the RV to empty the tanks elsewhere.

Nick DeCesare chaired the one-day trial held by Potomac Valley Golden Retreiver Club out of Frederick Maryland. This was their first trial here and was held in conjuction with the GRCA national specialty. “I couldn’t believe it when I walked in here,” Nick said. “It’s an incredible place. The pictures I was sent ahead of time don’t do it justice. And they were really good pictures!”

Nick said the Frederick location where their club generally trials has seen some improvements over the years. They recently tarred part of a field for extra parking which made a big difference for everyone. Their 225 member club was founded in 1968 and do hunt, tracking, conformation and obedience in addition to agility. They hold 3 agility trials a year, in April, June and September.

The club offered trick dog testing for anyone who wished to add one of the new AKC trick dog titles to their dog’s award. The beginner level was relatively simple for any agility dog, especially if they already had their CGC. Also, freestyle dogs could likely achieve much higher trick dog level titles.

Oh those loveable goldens! The GRCA National Specialty was proud to hold its 25th agility trial this year. Bets Keen chaired this trial, and was so busy she didn’t have time to properly run her own dog!

Bets said she’s chaired a trial once before, but mentioned that her co-chair Nick does it all the time which made things go more smoothly. “The trial went really well – and what an incredible space!”

“We were so fortunate to have the Salisbury and Talbot clubs to supply the equipment! Blue Herring members also helped out, and supplied some additional equipment,” she added

Bets was impressed with the large number of novice entries at this trial, “over 60 I believe.” She was also impressed with the great running dog and handler teams, and excellent judges. She added a sentiment shared by all trial chairs: “I’m very happy that there were no incidences.”

Two awards not usually seen at agility trials are High in Trial and High in Trial Preferred. The high in trial was earned by Donna Schmidt with her dog Jade; they she also received the GRCA Excellence in Agility trophy, a rather large and quite heavy “perpetual” trophy. Huge congratulations to this magnificent team!!

Linda Flora and her dog Zap won the High in Trial Preferred. Congratulations to that team too!

Overall I really enjoyed trialing at Crown Sports and would like to attend a “typical” trial there one day, one that isn’t backed up to a specialty. There is plenty to do in the area, so taking a few extra days as a tourist would definitely be part of the plan!