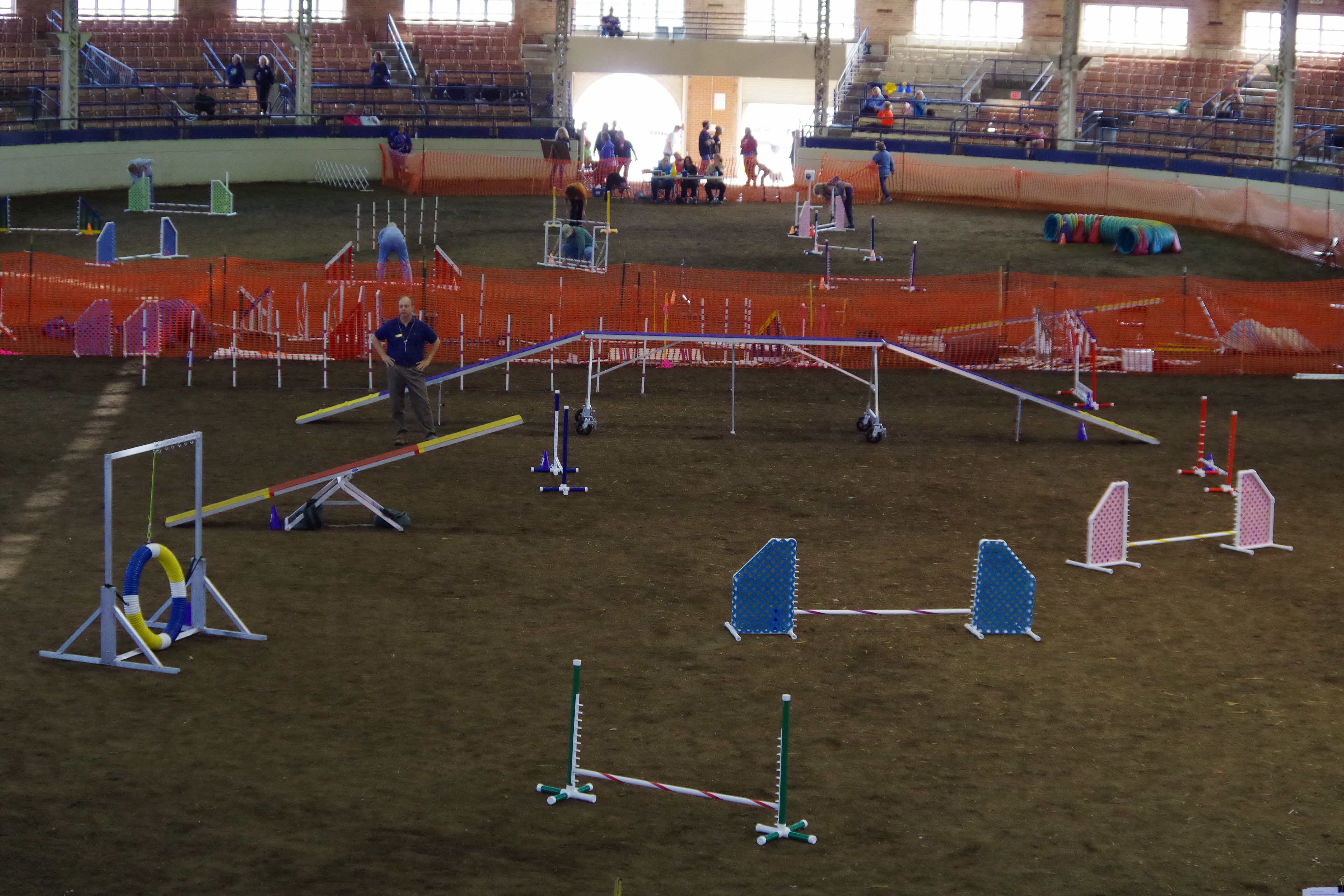 We want to give a four-paw salute to the organizers of the Capitol Canine Training Club for the agility trial event they held Oct. 14-16 at the Coliseum of the Illinois State Fairgrounds in Springfield!

The club literally went above and beyond the call of duty by making sure upper deck windows three stories above the floor line were blocked by opaque shades to remove sun spots that have disturbed both dogs and owners alike during competitions in past years. Capital Canine raised the funds to purchase half of the panels with its own contributions and received a sponsorship for the other half of them.

We’d also like to give a shout-out to RV coordinator Chari Hopper, who served as a one-woman welcoming committee for many of the participants arriving in motor homes and campers. Ever organized, Chari kept things moving in an efficient manner with friendly directions on parking and hookups, as well as helpful tips on navigating the fairgrounds.  The camping area had both 30 and 50 AMP electricity, water hookups, and restroom with shower facilities on site as amenities.

Soft On The Paws

We’re not sure how they did it, but the floors of the two rings were simply lovely for the dogs as they competed — moistened earth that was soft on their paws without being wet, which virtually eliminated any dust problems. The well attended event ran the rings like clockwork, thanks to the diligence of Marilyn Stewart, who served as both club president and trial secretary, Mary BonDurant, trial chair, Mary-Lou Flowers, volunteer coordinator, Karen Winters, a relentless course builder, and many more volunteers too numerous to mention. Talk about a lot of work!

The venue itself was held in the stately 60,000-square-foot Coliseum, a  three-story, enclosed oval-shape amphitheater constructed in 1901 and renovated in 1958, along with changes for ADA accessibility.  This trial may have been the last agility event at the Coliseum until the state of Illinois finds funding for repairs: the Illinois Department of Agriculture closed the venue this week after finding structural deficiencies.  The ag department said the Coliseum will remain closed until appropriate repairs are made.

We hope funding can be found as the venue showed a lot of architectural character and amenities, such as restrooms closeby and ample bleacher seating.

The 100’x108’ rings were not completely enclosed and had chutes, which permitted a way for some of the competing dogs to get into mischief, but it was not a big problem. Crating was conducted around the outside walkway of the Coliseum, along its inside wall, so viewing the trial meant going up some steps to the bleacher area, or using the elevator.

The two Trial Judges were Annette Smith from Hollywood, Fla. and David Hirsch from Columbus, Ohio. There was also an AKC rep at this trial for the entire 3 days. Overall the event was a lot of fun, afforded the opportunity to meet some wonderful new agility friends, and is highly recommended as a venue after repairs are made and the building is once again available to play with our dogs!